Skip to content
Puerto Rico is a beautiful exotic island with tropical humid weather. For many people, relaxing on a white sandy beach on a Caribbean island is one of their biggest dreams. Most islands can only be visited during certain months but Puerto Rico represents a great travel destination all year round. 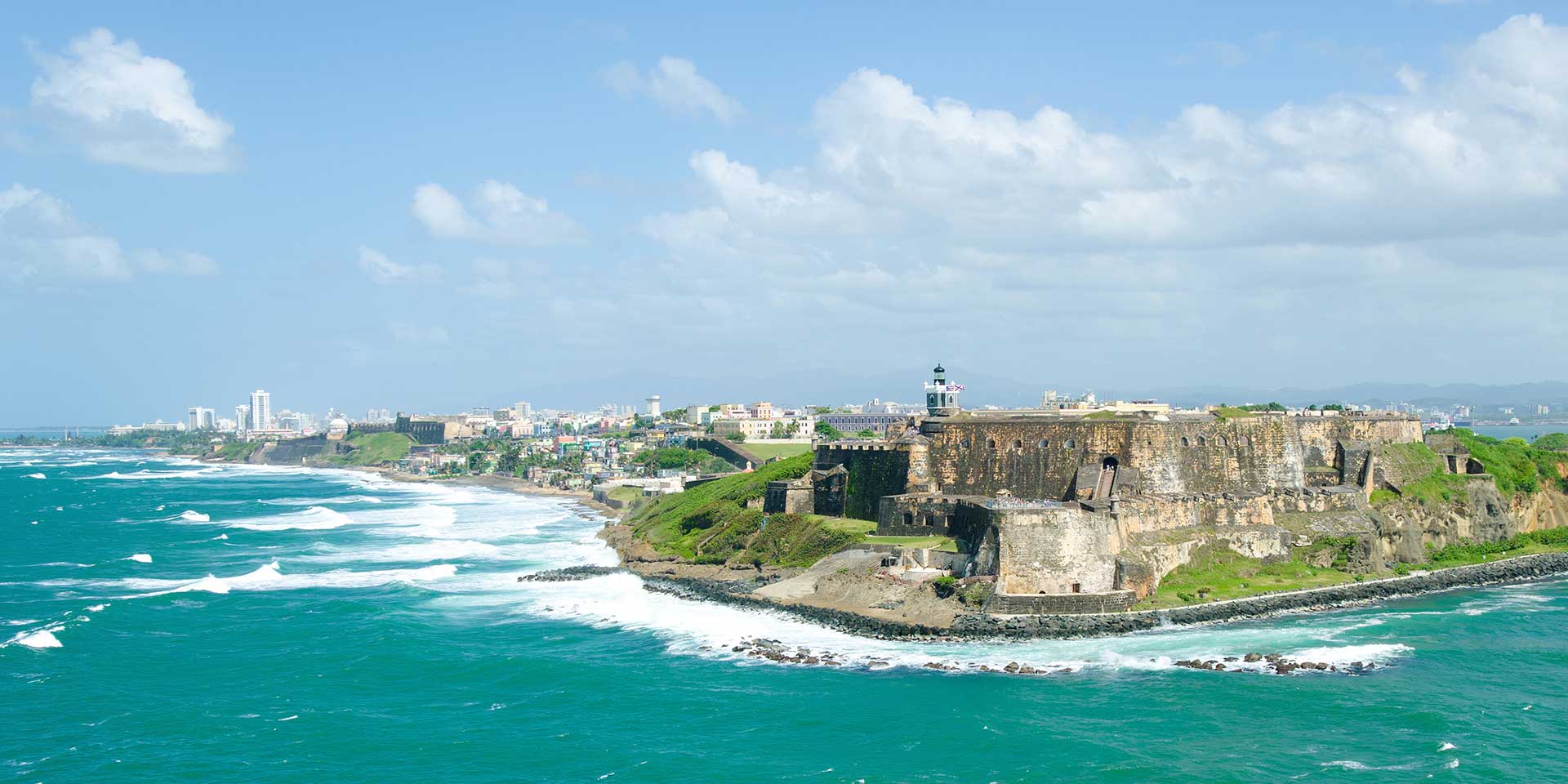 In today’s brief travel guide, you will find out the best time to visit Puerto Rico as well as the things you can do there and the aspects any tourist should take into consideration before going to this country.

Main Reasons to Visit Puerto Rico – What Can You Do There?

What’s the best method to see how life is lived on an island? Going on a boat trip, obviously! You can purchase a fun catamaran cruise that takes tourists to Icacos Island where participants can enjoy an entire day of swimming, sunbathing, and relaxation. The staff provides snorkeling gear so you will be able to see the amazing underwater marine life. Moreover, you will be served with plenty of Pina Coladas and rum punch. 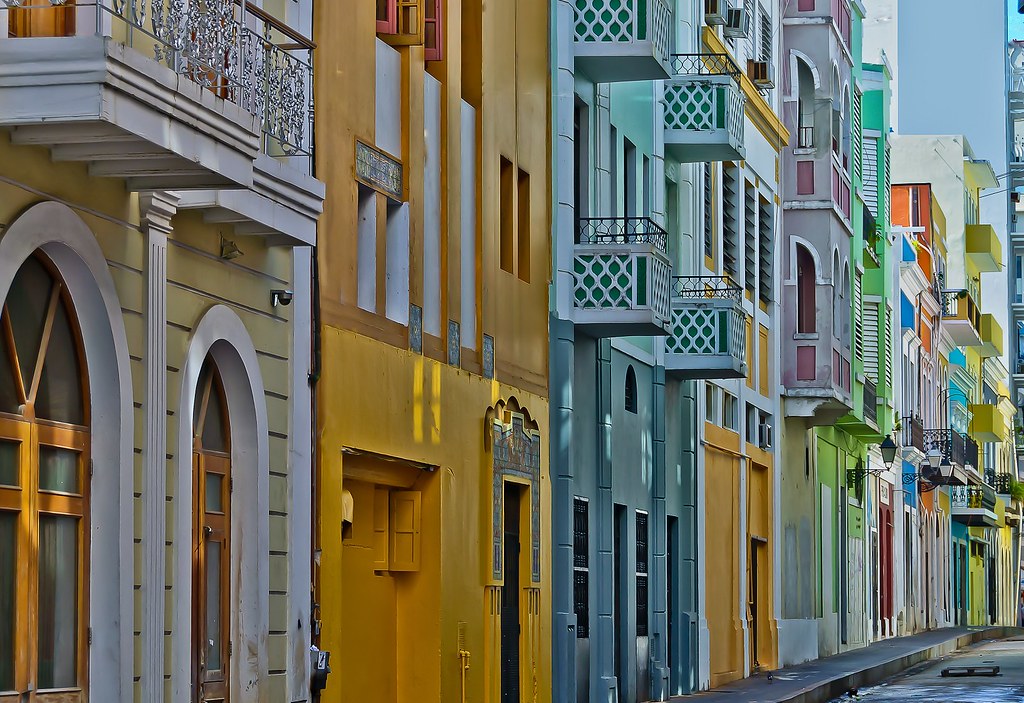 This old city is interesting and colorful. It is situated in the island’s colonial part where the Spanish conquistadors settled once. I personally love the narrow and bohemian cobblestone streets as well as the old buildings that are painted in pastel shades. All these things must be seen on foot. Visitors can even attend one of the local guided walking tours. From street bars to shopping boutiques and nice restaurants, there are plenty of activities one can do there.

3. Indulging in the Puerto Rican Food

Most tourists are more than impressed with how tasty the local cuisine is. According to the islanders, their food is the most delicious one in the entire Caribbean area. Popular dishes such as sweet sticky rice and mashed plantain provide a great blend that has different influences taken from the following cuisines: Spanish, American, and Tahino. My favorite spots in Puerto Rico where you can eat yummy food are Oceania, Verde Mesa, and Boronia. 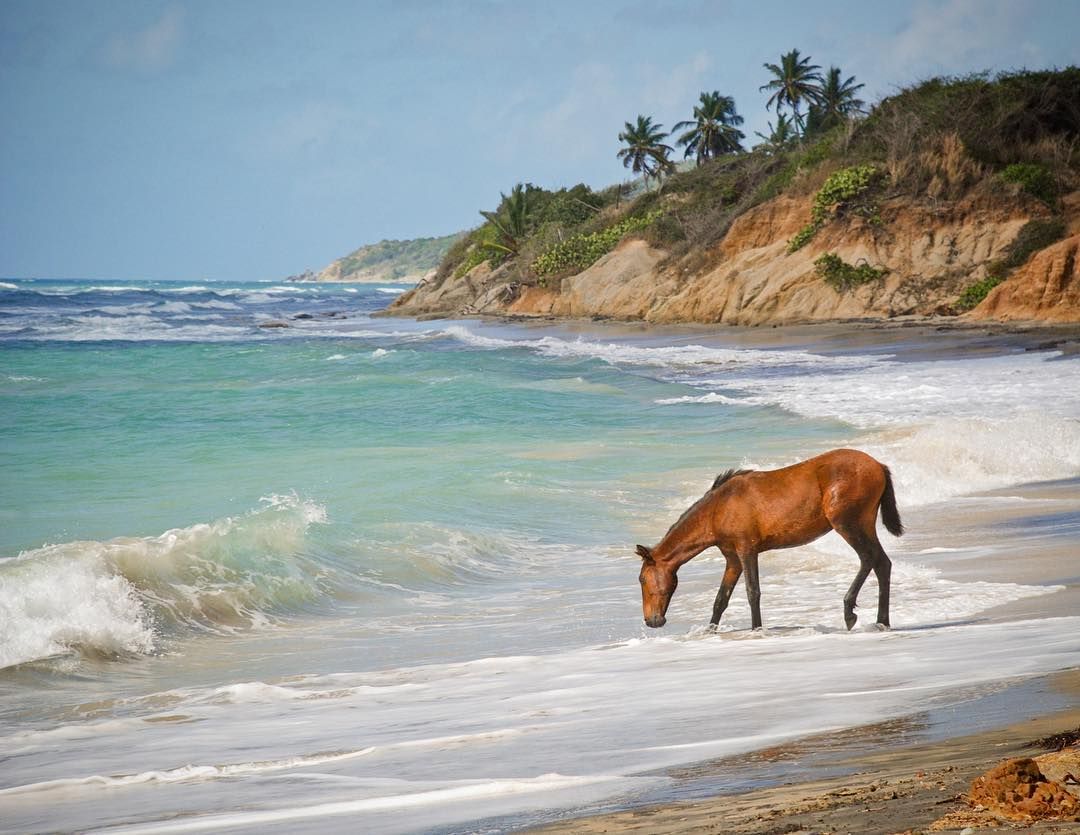 You will be amazed by the poised and beautiful wild horses that roam the black sandy beaches of Puerto Rico. In fact, there are more than 2,000 horses on Vieques Island. You will even feast your eyes with sights of delicate baby horses that frolic on the beach. Although this is a small island, it is rich in amazing experiences like the bioluminescent Mosquito Bay. You can go visit it by taking the ferry or by plane.

5. Kayaking in the Magical Mosquito Bay 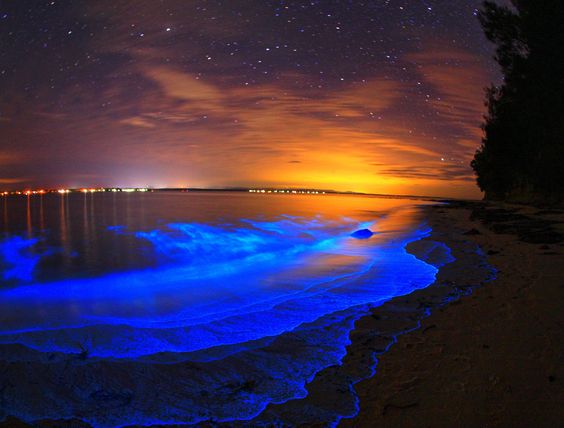 Speaking of this amazing place, let’s talk a bit about it. Once it gets dark outside, the waters in this area light up and you will be seeing millions of electric blue spots that are produced by the microscopic critters of the lagoon. You will find this place on Vieques Island, in its eastern part. Kayaking here after dark is a remarkable and magical experience.

Puerto Rico is popular for its blue waters and breathtaking lagoons. But, what’s even more amazing than that are the mysterious and incredible things that lie beneath the surface. As a tourist on this island, you will get the chance to snorkel while also enjoying amazing views of the Spanish shipwrecks, some of which were made in the 1500s. Both Rincon and Vieques are excellent places to try this experience.

7. Seeing the Monkeys of Cayo Santiago

Cayo Santiago which is also known as the Money Island is a must-see when you’re visiting Puerto Rico. The island is inhabited by monkeys solely so you won’t be able to go on it but you will pass it by on a boat and you will see these fluffy animals. You should definitely include this trip on your general itinerary. 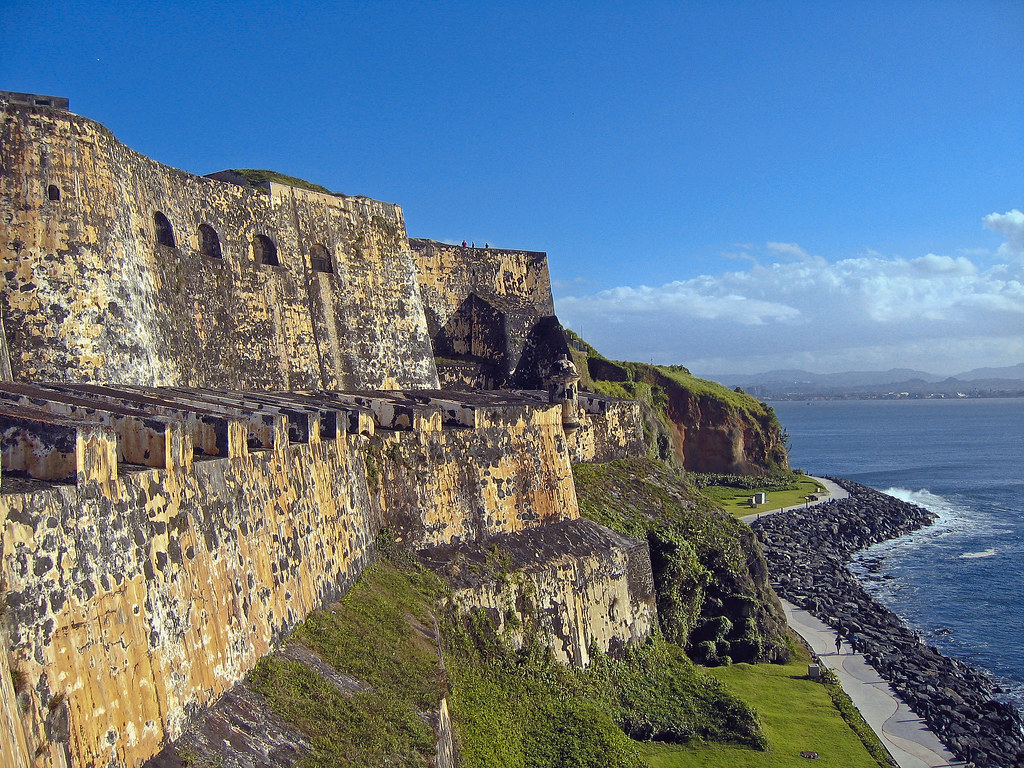 Did you know that San Juan is very old? In fact, it is the oldest one in the entire Western hemisphere. This was first a Spanish colony that was protected by walls which surrounded it on all four sides. The entire construction was massive and parts of the fortification remain till this day. San Juan Fort was the biggest fortress created Spanish conquerors in the New World. There, you will have an amazing view of the Atlantic Ocean.

The residents really know how to enjoy themselves, party, and let loose. There’s a festival or major event taking place every month throughout the entire year. Some celebrations last 12 months. Festival-wise, the best time to visit Puerto Rico is between December and January. If you’re in town when the San Sebastian Festival takes place you are in for a four-day treat filled with delicious food, dancing, beer, and street parades.

10. Going to the Bacardi Rum Factory

Attending the Bacardi tasting tour is a fun activity. First of all, you will receive a drink ticket. Right before the tour, visitors are served with a rum-based cocktail. After that, you will go inside the factory to take a peek at the way rum is produced and processed. Although the visit is quite brief, the real fun comes at the end of the tour when you will get to taste no less than five different types of rum.

a. From Mid-December to Mid-April

During this period, visitors can find hotel rates that are lower than $100 per night which is pretty rare for an exotic island in the Caribbean. Still, these winter months are quite crowded due to the fact that the country has a more than pleasant weather at this time. The average temperature is situated around 27-28 degrees Celsius. There are several key events that you should consider: San Sebastian Street Festival, Casals Festival, Maricao Coffee Festival, and Ponce Carnival.

b. Mid-April and June

This is definitely the best time to visit Puerto Rico because, during spring, the weather remains sunny yet breezy which makes the air breathable and the temperature bearable. Moreover, the crowds I’ve mentioned above are gone by now. Now, you can find hotel rates that are lower than $150 per night (at a four-star hotel). In June, San Juan holds some of the greatest events in the area. One of those events is the SoFo Culinary Week. During it, South Fortaleza Street is filled with tasting booths.

c. From July to September

If you decide to go to Puerto Rico in July, August or September, you should know that there’s a higher risk of storms and hurricanes. Also, the temperatures get pretty high. On the other hand, this is when the official offseason begins, so you will find great accommodation deals. Remember that there aren’t any crowds, so it will be easier for you to find reservations at fine dining restaurants or a good spot at the hotel pool. If you’re willing to go to Puerto Rico even though the risk of hurricanes is higher, you will be rewarded, not to mention the holiday’s costs won’t break the bank. Early July, there’s the Aibonito Flower Festival which is the biggest plant show on the island.

d. From October to Mid-December

The tropics are amazing during the fall season because the hotel rates and airfares are more than reasonable. During this period, you will be able to enjoy a luxury resort type of accommodation, situated directly on the beach, for around $130 per night. Moreover, if you don’t necessarily want to see the ocean from your room, the rate goes below $90 per night. You should search for accommodation in the beautiful area of Rincon which is located on the west part of the island. Another excellent choice is the Carolina Beach. You will find it in the center part of San Juan. In October, the island is the host of the Le Lo Lai Festival where you can enjoy traditional music performances.

What Is the Best Month to Travel to Puerto Rico?

There isn’t a best month to travel to this island. Instead, there’s a best period which starts in mid-April and lasts until the end of June. This period is great when you consider the weather. However, if you’re looking for less expensive prices, then, the best period would be the offseason months:

What Is the Hottest Month in Puerto Rico?

What Month Is Hurricane Season in Puerto Rico?

In Puerto Rico, the hurricane season starts in June and lasts till the end of November. Nevertheless, these unfortunate events occur more frequently from August to October. Here are some interesting and useful things you should know regarding Puerto Rico’s annual weather:

What Is the Cheapest Month to Go to Puerto Rico?

Most visitors go to Puerto Rico in early spring and during winter months. So, in terms of prices, the best time to go there is during hot summer months:

It Is Always Summer

On the island, the weather is always nice. Weather-wise, it is very simple to plan a trip to Puerto Rico because it always feels like summer. The rainy season which may come with heavier rainfalls begins in May and ends in October. It may seem like a very long period but the rain showers don’t normally last longer than 30 minutes. You will enjoy nine hours of sunshine per day and you will be almost always able to swim in the ocean.

Hurricanes Are More Likely to Appear from June to November

The whole tropic area features storms and hurricanes once in a while and this country makes no exception. On the other hand, the odds of such a powerful storm are quite low. Moreover, people receive warning weeks in advance so that you can get yourself to safety. Despite the 2017’s Hurricane Maria, the island is recovering quickly.

Beaches in Puerto Rico are simply gorgeous. They represent one of the main reasons why vacationers go to this island. Popular places like Rincon or Culebra tend to be crowded in peak season. Therefore, if you want to go there and chill, you should think about planning your trip in either November or December. This small period is right before peak season.

Puerto Rico Is Safer than You Think

The main problem there is pickpocketing or petty theft but this is an issue in all heavily-traveled areas. Make sure to use your street smart skills and remain aware of your surroundings at all times, especially when you find yourself close to popular and crowded tourist attractions. Crime-wise, Puerto Rico is safer for families and solo travelers than plenty of US states.

Puerto Rico is a great place to go to. So, the best time to visit it is whenever you want. Of course, you also need to consider some of the things I mentioned in today’s article, things that are linked to aspects such as weather, hotel rates, etc. In my opinion, it is best to use one of their local tip planners in order to create an adventurous yet fun and relaxing vacation. Are you ready to start packing? Further read:

Alexandra is a keen traveler. She loves to discover new places, plan trips, and tell you all about it. In her articles, Alexandra provides useful answers to common questions regarding travel budgets, finding the best travel deals, accommodations, travel expenses, planning a trip, saving money on flights, travel guides, and many other topics that I am sure you will find helpful. All the tips and detail she offers are tested and proven. With her help, you will save a lot of time and you won't feel overwhelmed by long Internet searches. In her role as a travel blogger, Alexandra allows you to spend more time doing exactly what you love most: traveling.

The Best Things to Do in Rochester, Minnesota

The Best Things To Do In Erie PA

The Top Things to do in Iowa City – Complete Travel Guide!